How To Deal With Woodworm 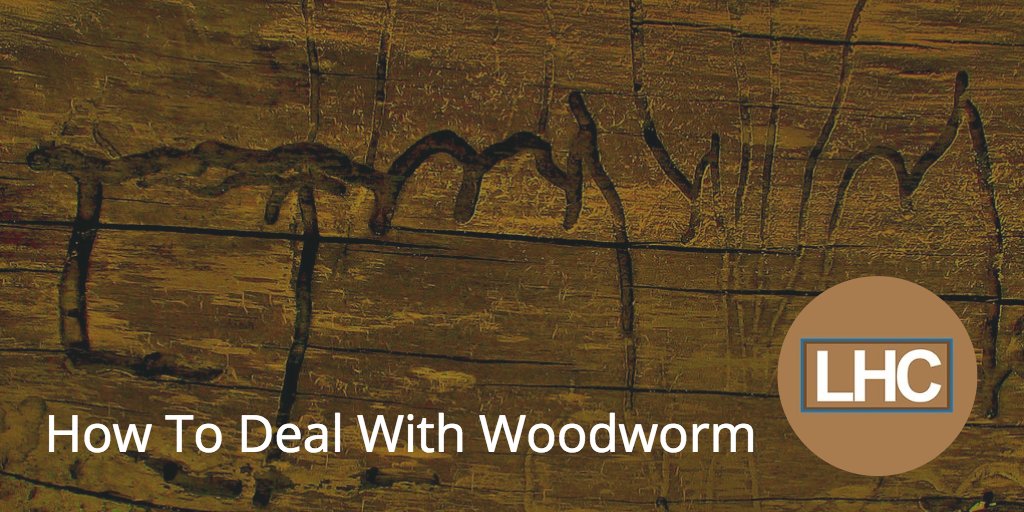 Rather than being a specific species, woodworm actually refers to a broad range of wood-boring beetle that feed off timber structures and felled trees during their larval stage. Once they grow into beetles, they start boring through the wood before flying away, leaving behind the characteristic surface holes.

In the UK, woodworm is a particularly common concern, and one that has been hyped up enormously in recent years. In fact, around 5,000 homes are treated weekly across the country for woodworm infestations.

However, while woodworm can undoubtedly be a very real problem, it is frequently misunderstood, leading many homeowners to pay large amounts of money to have long-inactive infestations treated, sometimes even a century after the woodworm left the building. 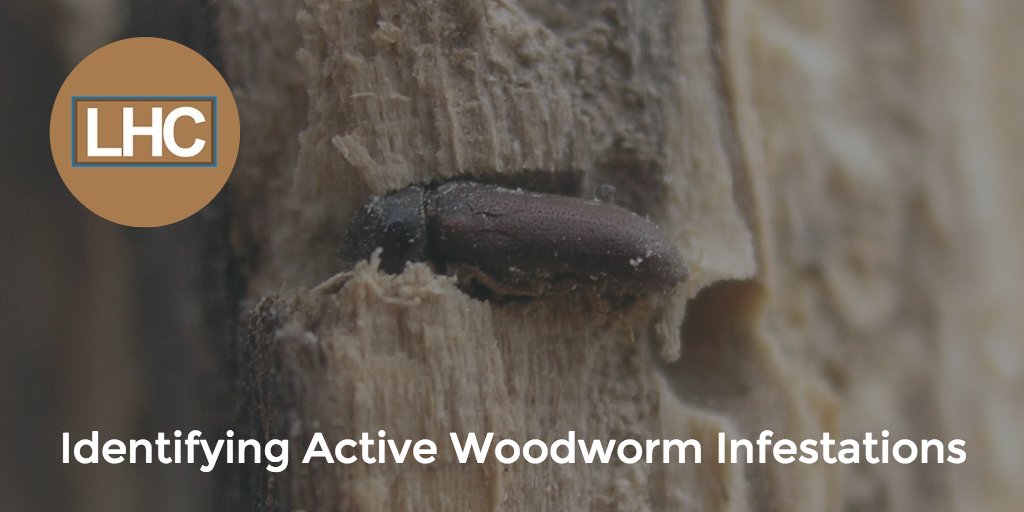 Homeowners are often afraid when they examine roof structures, wooden beams and old furniture to find hundreds of tiny holes in them.

However, while woodworm will undoubtedly turn out to be the cause, these holes do not necessarily point to an active infestation.

Woodworm needs enough moisture to survive, so it will only infect timber structures which have a reasonably high moisture content. For example, a common natural environment for the beetle is a recently felled tree that still contains a large amount of moisture.

When timber houses are constructed, the new planks of wood may contain an active infestation that only becomes clearly visible after a number of years, or the infestation occurs within the first ten years of the structure being built.

However, a properly heated and ventilated home will eventually lead to the moisture in the new wood evaporating, leaving behind an unsuitable environment for the pest. As such, woodworm infestations tend to be gone within a decade of the house being built.

Decades or even centuries later, a so-called pest control professional might come round and treat the place with toxic chemicals for an infestation that is no longer present.

The above highlights one of the most common scenarios, but woodworm infestations aren't entirely as simple as that. It is also quite common for infestations to take place long after the house has been built due to encroaching damp.

For example, if a roof structure has been poorly maintained, water may intrude into certain areas, creating a suitable environment for woodworm. It may also infect furniture which has previously been stored in a damp area, such as a basement or outbuilding.

While the small flight-holes, typically about 2mm in diameter, are by far the most obvious signs of woodworm, they often don't point to an active infestation. In fact, it's more likely that the holes have been there for a very long time, in which there's absolutely no point in investing in woodworm treatment.

- Fresh dust gathering on surfaces around and beneath the flight holes. One of the most common signs of an active woodworm infestation, this dust is also known as frass, a mix of wood dust and beetle excreta. In highly active infestations, you may notice this dust reappearing on a daily basis, no matter how often you clean the place.

- Dead larvae appearing near the surfaces almost certainly point to an infestation that is still active. More importantly, however, be on the lookout for adult beetles around windows and doors, particularly from May to September. The adult beetles are attracted to daylight, hence the likelihood of their appearing around windowsills.

- Any rotten wooden structure with a high moisture content makes for the perfect environment for woodworm, even if it has not yet been infested. Keep a lookout for weakened or damaged floorboards, rafters and other timber structures, and try to determine the cause of the rot. Damp and woodworm are often related.

If you notice any of the above signs, it may be time to have the affected area professionally treated and, more importantly, identify the root cause of the problem. Damaged surfaces will need to be treated, repaired or, in cases where severe rot has set in, replaced entirely. 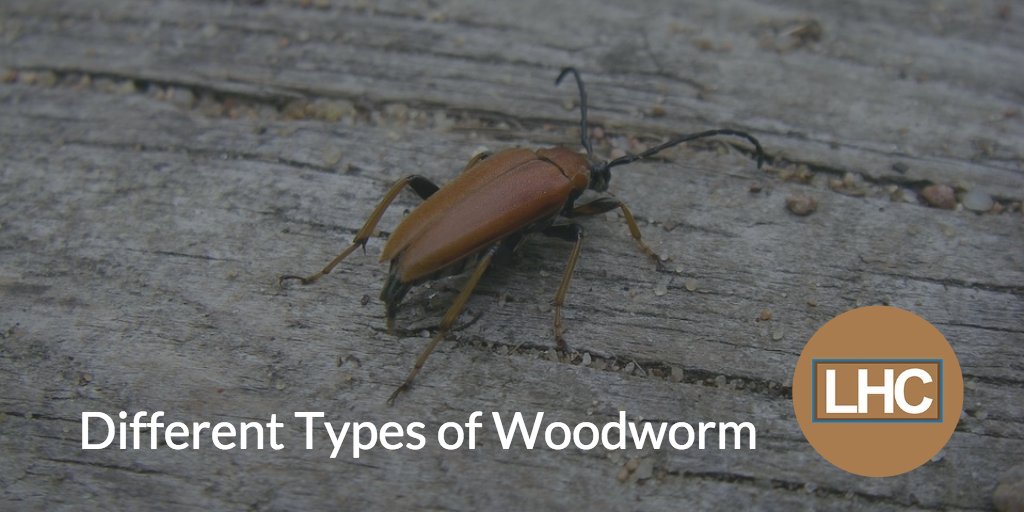 There are several types of woodworm beetle in the UK. The following takes a look at some of the most common and potentially harmful species:

The common furniture beetle is the most prolific of all types of woodworm larvae in the UK. The larvae live for up to five years inside the timber, boring through them as they reach adulthood.

The adult beetle is only 3 to 4mm in length, and is active during warmer periods of the year. In spite of the name, this species can infest almost any type of timber structure, although it generally favours softwoods such as pine.

One of the most harmful species, the death watch beetle is native to the UK, and unlike most other types of woodworm, it favours hardwoods such as oak and ash. It is most commonly found in older buildings with hardwood frames, particularly in England and Wales.

If your home has a death watch beetle infestation, you should listen out for its characteristic tapping sounds coming from within old beams and other timber structures. The larvae only emerge from the timber after at least five years, and the adult beetles are typically around 7mm in length.

Although not native to the UK, the house longhorn beetle has now spread all over Europe and much of the rest of the world. In the UK, it is most prevalent in the southeast counties. One of the larger woodworm species, the adult beetle can grow up to 25mm in length, and is easily identifiable by its long antennae.

The larvae are also quite large, leaving flight holes of 3 to 7mm in diameter when departing the wood after boring through it for 3 to 11 years. This particularly harmful species typically thrives in seasoned softwoods.

The powder post beetle infests hardwoods like oak, ash and mahogany. However, due to the relatively large size of its eggs, it only effects hardwoods with wide pores, such as the above. The adult beetle grows up to 7mm in length, leaving flight holes about 2mm wide.

The beetle most commonly effects outbuildings and timber yards, and an ongoing infestation can reduce wooden surfaces to dust. Powder post beetles have a life cycle lasting only one year, and the adult beetles are easy to identify by their long, thin reddish-brown bodies.

Although the above species account for almost all of the infestations in the UK, there are a few other rarer types, such as wood-boring weevils and bark borers.

How to Treat Woodworm 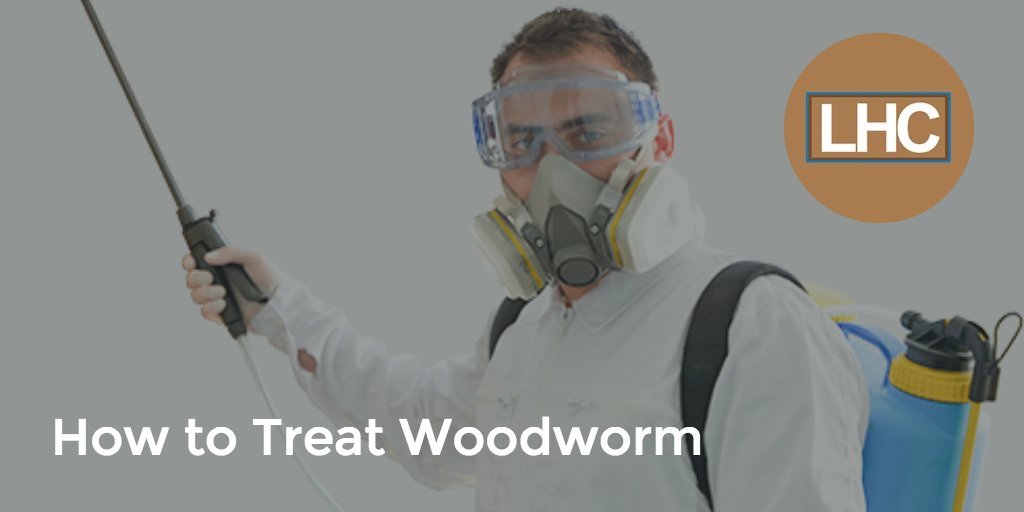 The correct treatment for the pest depends on the particular species and whether or not the infestation is still active. Because rot is caused by damp, leading to a more attractive environment for most species of woodworm, it is also important to address the root cause of the problem and carry out any necessary repairs.

Timber which has been severely structurally damaged by damp- or woodworm-related rot will likely need to be replaced entirely.

Some woodworm infestations may be suitable for DIY treatment. For example, the common furniture beetle, which generally only causes cosmetic damage, is usually treated by a boron-based solution which is sprayed or painted onto the affected surfaces.

Other species, such as the far more harmful house longhorn or death watch beetles, usually require the services of a professional pest control company, since it will be necessary to inject the affected surfaces with specialized chemicals and hardware.

Since prevention is always the best cure, it is important to take some additional steps once the infestation has been suitably treated. Although reputable pest-control companies generally provide a warranty, there are a few things you can do to further reduce the chances of the woodworm returning:

- Eliminating damp in your home will make the environment far less attractive to woodworm. Ensure that any leaks are fixed, and keep humidity levels as low as possible by ensuring good ventilation throughout the building. You can test damp levels in timber yourself by using a moisture meter. For minimal risk of infestation, you'll need to aim for readings of no more than 12%.

- Remove and replace any severely damaged or infested wood to reduce the risk of the infestation spreading.

- Treating wooden surfaces with paints or varnishes can help to protect them from further pest infestations.

A pest control expert should be able to identify active infestations, treat them and assist you in improving the environment of your home in such a way that it greatly reduces the risk of woodworm returning.

To arrange a survey with the woodworm treatment specialists at London Home Counties – call today on 0208 365 3724 or email us.

Free Report: 4 Things That Stop The Spread of Woodworm